Are you want to HIRE me Contact Us Hire Me!
Home
Freelancing
Tech 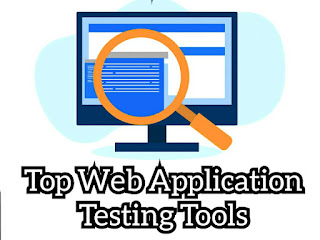 Web Application Testing Tools are used to test the functionality, security, performance and usability of Web Applications during their development as well as after deployment. These tools are also used to check and validate different browsers and screen resolutions before going live. The top 10 web application testing tools in 2022 with comprehensive list are as follows .

What are Web Testing Tool

A web testing tool is a software application which aids in testing web applications and websites. One of its primary function is to simulate various user activities, like filling out forms, clicking buttons, and following links to ensure that all parts of an application work as expected. We all know that testing is very important in any field to ensure quality, peace of mind and a competitive edge. There are many different kinds of software testing practices like unit testing, API testing and functional testing. However, for websites what we need is web application or website testing. And here I have compiled a list of top 10 free website or web application test tools that will help you in your work as a QA tester.

Which testing tool is in demand 2023

There are more than a dozen testing tools on the market today, which are widely used. Most of them can be divided into four groups: load testing, performance testing, web scraping and security testing. Below is a table with brief introduction to each one of them

Which tool is used for web application testing

Apart from various manual and automated testing tools, there are some web-based application testers that not only provide you with comprehensive testing features but are also easy to understand and operate. Here we present a list of top ten web-based software testers that can help in finding bugs and defects in your website effectively. Let’s have a look at them one by one

Lisg of The Top 10 Web Application Testing Tools In 2023

This is currently one of top web application testing tools used by many software testing companies. It has been in use for more than a decade now and has witnessed multiple major versions. Selenium is an open source browser automation tool designed to automate web-application tests across multiple browsers, platforms, and operating systems. The biggest benefit of using selenium is that it allows executing test scripts on several browsers like Firefox, Internet Explorer, Chrome etc., which increases website compatibility.

Google’s Cloud Platform makes developing applications and testing easy. With its suite of services, you can build, test, run, and scale your application on their infrastructure. It’s free to start with so if you are just getting started you can easily experiment without spending a dime. They provide 24/7 support and 99.95% SLA which is one of the best in our opinion.

TestComplete is one of our top picks in commercial automation testing tools. It provides a good set of features, which includes cross-browser support and record/playback abilities. Most importantly, its user interface is intuitive and easy to use. A live demo is available on their website so you can test it out before you buy. While it doesn’t have some of the advanced capabilities that other tools on our list have, TestComplete does not require any additional purchase for them as well.

According to experts, one of the most valuable web application testing tools in 2022 is SoapUI. It’s developed by ThoughtWorks, a company which has been making software for over 20 years. There are three major versions available: Basic Edition, Professional Edition and Enterprise Edition. SoapUI has gained high reputations from its users due to it’s outstanding performance, efficiency and ease of use as an all-in-one open source toolset. It supports numerous testing technologies such as SOAP, REST and AJAX.

Apache JMeter is an Apache project to test performance of software, Web applications, and networks. The latest version at time of writing is 2.12 and has been downloaded over six million times from its official site. It’s free to use and open source – meaning that it can be used on either personal or commercial projects.

A cloud-based load testing tool that enables users to simulate thousands of virtual users simultaneously, at any scale. Not only does it have a simple user interface, but it also supports most major browsers and mobile devices.

Testdroid Recorder is an automated cross-platform mobile test recording tool for Android. It helps developers in creating high quality and maintainable tests by generating accurate and reliable scripts without any manual work involved. Testdroid Recorder is being used by global companies, universities, open source projects and communities to write test scripts. Testdroid Recorder has been downloaded more than 40K times within a year of its launch as a public beta version on Testdroid Cloud website.

A free and open source packet analyzer that is also recognized as a powerful network protocol analyzer. It is compatible with Windows, Linux, Mac OSX, and Solaris. This software comes with more than 500 pre-loaded protocols and allows you to sniff live traffic or capture files from a specific date and time in various formats. This tool helps you analyze various packet fields including IP addresses, source & destination ports, protocols used etc.

This is a load testing tool used for functional, stress and performance tests. A unique feature of WL is that it lets you capture performance metrics during test run, which can then be used for capacity planning purposes. The suite contains a powerful API that allows developers to integrate into any type of application; web and mobile apps as well as mainframe systems. The software also includes a HTTP recorder to create test scripts without requiring users to learn scripting languages like Java or Perl.

With LoadUI, you can test your applications for performance with ease. LoadUI enables users to load and simulate thousands of users at once. These testers use real browsers on virtual machines that simulate real-world conditions. This helps you create a realistic scenario before releasing your website or application to production so you don’t face any unexpected problems when it goes live. It includes features like multilingual support, active recording and playback features, logging features, video recording capabilities, and more!

ZAPTEST is a web application security testing tool that helps to automate different web application attacks. This tool allows you to scan all major vulnerabilities such as SQL injection, cross-site scripting, remote code execution and more.

What is the best tools for testing

Selenium is an open-source tool for website testing. Selenium supports a wide range of browsers and platforms and is used by both individuals and organizations. Selenium has more than 200 commands, which allow you to interact with your website via a browser, record and play back tests, debug tests quickly, collaborate with other testers and generate reports on test results. However, users are required to learn a scripting language in order to fully utilize its features.

Is Cypress better than Selenium?

Selenium has been an invaluable testing tool for years now. However, new tools like Cypress are coming out and making it hard to know which one to use. If you’re struggling with choosing between Selenium and Cypress, take a look at our breakdown of both before making your decision.

What is the future of testing?

No one knows for sure what kind of a future awaits us in next few years but technology never stopped evolving and there are many trends to watch out. The future belongs to testers who can design appropriate testing strategies that can adapt well to technological changes. This is why it’s important for testers to master various tools so they can remain relevant and reliable. Here is a list of Top 10 most popular tools which will make your work easier in coming few years. So let’s check them out!

My name is Arefin and I'm an experienced marketer and SEO-friendly article writer. I specialize in creating impactful content that helps boost visibility and rankings on search engines. I'm the owner of Style2Money, a content creation agency…
#Freelancing #Tech

Do Not Make Spam

Cookie Consent
We serve cookies on this site to analyze traffic, remember your preferences, and optimize your experience.
More Details
Oops!
It seems there is something wrong with your internet connection. Please connect to the internet and start browsing again.
AdBlock Detected!
We have detected that you are using adblocking plugin in your browser.
The revenue we earn by the advertisements is used to manage this website, we request you to whitelist our website in your adblocking plugin.
Site is Blocked
Sorry! This site is not available in your country.